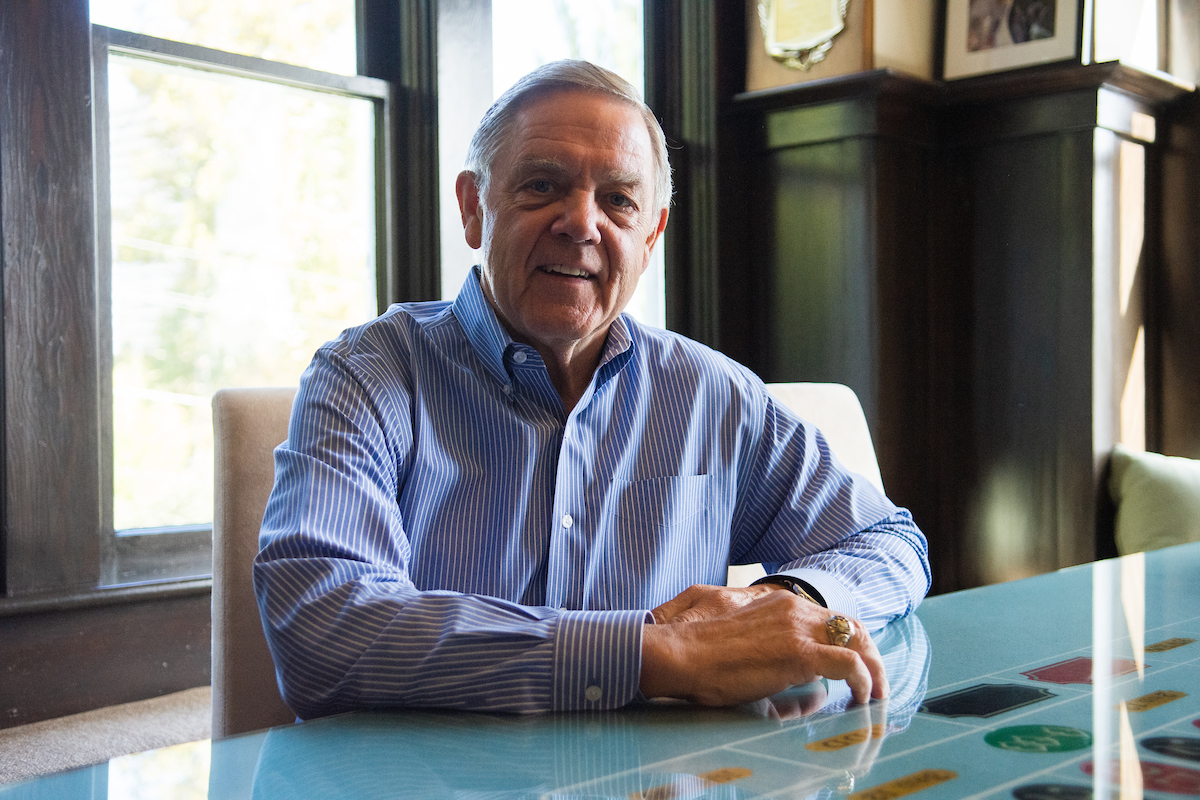 RENO – Phil Satre and his wife, Jennifer, were planning their next visit to a U.S. national park when Elaine Wynn approached the long-time gaming figure more than a year ago about joining the board of Wynn Resorts as it dealt with allegations of sexual harassment and assault against CEO Steve Wynn.

After 25 years in chief executive and board level positions with casino giant Harrah’s Entertainment and another 10 years as the chairman of gaming equipment manufacturer International Game Technology – seeing both companies through multi-billion-dollar mergers – travel to uniquely American locations such as Maine’s Acadia National Park and New Mexico’s Carlsbad Caverns were soothing experiences.

Now, Wynn Resorts’ largest shareholder wanted Satre, one of the gaming industry’s most respected leaders, to prop-up a foundering casino company encircled by a myriad of regulatory and legal issues stemming from the legal complaints against now-former chairman and CEO Steve Wynn. Ex-wife Elaine Wynn was in a contentious battle with the company’s board and filed a lawsuit to regain a seat that she lost in 2015. The casino operator was less than a year out from opening a $2.6 billion resort in Boston.

Satre wasn’t sure whether he wanted to step into the quagmire.

“I told Elaine I needed to give this some thought,” Satre said recently during a wide-ranging interview in which he talked about the company’s future, the surprising merger of Eldorado Resorts and Caesars Entertainment and his history with the president of the United States.

At the time Elaine Wynn approached him, Satre was chairman of gaming equipment giant International Game Technology and was considering stepping aside after 13 years. He wasn’t looking to join another gaming board.

“When I went through the process of whether or not I should pursue this, I looked at the company’s assets and concluded the vast majority of the employees loved working there, customers were loyal, and management had taken steps to make changes,” Satre said.

“My only condition was (that) I wouldn’t come in if the board was still litigating with Elaine,” Satre said. “I wasn’t going to get into the middle of a fight between the company and Elaine. I would come in if there was a clear deck.”

In August 2018, Elaine Wynn dropped her lawsuit, agreed to cap her ownership stake in the company at 9.9 percent and entered a “standstill agreement” through 2020 in which she would not challenge the board’s decisions.

Satre became vice chairman of the Wynn board and chairman three months later. He immediately brought decades of gaming industry credibility to the troubled company.

“I think they were probably in need of some experienced supervision,” said gaming analyst David Katz, who follows Wynn Resorts for Jefferies Group. “We had posed questions about where the company was headed, was there going to be a proxy fight? In that regard, he brought in the credentials to calm things down.”

Closing in on a year as Wynn chairman, the company is still dealing with fallout from the Steve Wynn sexual harassment matter. Two new lawsuits were filed against the company by employees last month. In a statement, Wynn Resorts said the “claims appear to be those already thoroughly investigated by the special committee (set up by the company) and regulators; no new claims of this type have been received by the Company since the close of the investigations.”

Satre has settled into a role as a “traditional” non-executive chairman.

“For a period there I was much more active dealing with regulatory issues in Nevada and Massachusetts, and representing the new board,” Satre said. “I was also getting up to speed on the company. I had been away from the operating side of the industry for a long time. I hadn’t been to Macau in ages. Steve is gone, but I’m not saying I replaced Steve. We have a new corporate governance structure and I feel pretty good about it.”

He helped steer the company through its regulatory matters in Nevada and Massachusetts, paying a total of $55 million in fines that ended discipline complaints. His appointment solidified the management team, led by CEO Matt Maddox. Encore Boston Harbor opened to high profile fanfare in June.

“We’re now developing strategic initiatives,” Satre said. “The cadence is more that of an operating company rather than all the angst we were going through.”

After leaving Harrah’s, Satre bought the Joseph H. Gray House, which was originally built in 1911 for the Reno department store owner. It was listed in 1987 on the National Register of Historic Places.

Satre converted the building into his law offices and installed a 1920’s roulette table he had in storage for decades in his conference room. He later learned that similar tables made by the manufacturer were rigged by Al Capone and the mob during the prohibition era.

He briefly served on the board of Tabcorp Holdings, an Australian gaming company, and joined IGT’s board in January 2009, becoming chairman 10 months later. Satre also held board positions outside of gaming, including a term as chairman of NV Energy and 13 years with retailing giant Nordstrom, Inc.

Wynn is now his only board position.

Sitting at the roulette table, Satre agreed with Katz, who said the investment community believes the next challenge for Wynn is to “clearly articulate and establish a plan for growth.” But the Wynn business model and the historic Harrah’s business model he over saw for 25 years are vastly different.

Satre said Wynn’s expansion opportunities “are limited.” The company is focused on international opportunities and “destination cities,” similar to Boston. “If a city like Miami would take bids, we would be interested,” he said.

Wynn is making a concerted effort to win one of the three gaming licenses in Japan. In Macau, where the company has three resorts, Wynn is spending more than $2.5 billion on the Crystal Pavilion complex adjacent to Wynn Palace on Cotai. The glass and steel structure includes two hotel towers with 1,300 rooms, a theater, an Asian gourmet food pavilion and art sculpture gardens.

Earlier this year, Satre supported a brief effort by Maddox to have Wynn Resorts acquire Crown Resorts of Australia, which included casino-hotels in Melbourne and Sydney.

“We like that piece of property we have a lot of ideas but we’re not ready to discuss them,” Satre said. “Getting the golf course back was critical to our positioning we have there.”

Satre said Wynn is not interested in acquiring any of Caesars Entertainment casinos that Eldorado Resorts might put on the market through the companies pending $17.3 billion merger, including those in Nevada. The company is closely following North Strip developments, including the $4 billion Resorts World Las Vegas that is expected to open at the end of 2020 and the nearly $1 billion Las Vegas Convention Center expansion, which will follow in 2021.

“Anything north of Wynn and Encore is good for us,” he said.

Satre had several thoughts on the pending Eldorado-Caesars merger that will create a gaming conglomerate with 60 properties in 18 states under multiple brands, including Caesars, Harrah’s, Eldorado, Horseshoe and Bally’s.

In a way, Satre has skin in the game.

He’s known the Carano family, founders of Reno-based Eldorado, for decades. He played a major part in building Harrah’s from three casinos in Reno, Lake Tahoe and Las Vegas, to a regional gaming giant that acquired Caesars Entertainment in 2005 for $9 billion during his last year as chairman.

Earlier on, Satre and his executives laid out a chart for gaming expansion across the U.S., building a range of cases from optimistic to low end.

“I think where we ended up was the most realistic case for expansion that we had planned out,” Satre said.

Satre said Eldorado “has a pretty good track record” from its previous acquisitions – MTR Gaming in 2014, Isle of Capri Casinos in 2017 and Tropicana Entertainment last year.

“It’s an interesting operational and executional challenge,” Satre said of the Caesars transaction. The deal strengthens Eldorado’s position in Nevada. The company operates five casinos in the state – three in Reno and one each in Laughlin and Lake Tahoe. The merger gives the company 13 more Nevada properties – nine in Las Vegas, two in Lake Tahoe and one each in Reno and Laughlin.

His advice for Eldorado, which will soon own many of the casinos Satre-led Harrah’s either built or acquired, is to clearly differentiate between the brands. He suggested a layered approach, similar to Hilton Hotels, which has brands for different customer classifications, including high-end luxury and tour-and-travel-type properties.

“Clarity of the brand is very important and it’s one thing I would look at if I were sitting in their shoes,” Satre said. “Staffing levels, restaurants, and capital investments, all of those items fall in line under where a brand fits into customer expectations. I believe that’s the one thing we should have done better at Harrah’s.”

Satre was one of a handful of gaming executives who founded the Washington D.C.-based American Gaming Association in 1994, serving as chairman in 2003 and 2004.

He was elected to the Gaming Hall of Fame in 2003 after he retired as Harrah’s CEO, and eight years after then-Atlantic City casino owner Donald Trump was inducted. He had many dealings with Trump after Harrah’s entered the East Coast casino market in the 1980s over the construction of what became Trump Plaza.

Harrah’s and Trump were partners in the Boardwalk development but “were at loggerheads” throughout the construction. Satre, Harrah’s point person, said the companies couldn’t ever agree on anything.

Harrah’s pulled out of the project shortly after the opening.

In November 2016, shortly before the election, Satre authored a commentary for the Reno Gazette-Journal, urging Nevadans “to reject” Trump’s candidacy for President, saying he was “appalled by the very thought he could become our president.”

In the commentary, Satre recalled a correspondence with Trump that was a “characteristic of the bluster, threats, intemperance and unsupported and unsupportable falsehoods” that he experienced with Trump during the 1980s.

“There were some idiosyncrasies at that time that we see today,” Satre said. “Both companies where I was executive chairman (Nordstrom’s and IGT) heard from the (Trump) campaign (to complain about the commentary.)”

Howard Stutz is a freelance gaming reporter for The Nevada Independent and the Executive Editor of CDC Gaming Reports. He has worked as a Nevada journalist for 30 years. He can be reached at howardmstutz@gmail.com. On Twitter: @howardstutz