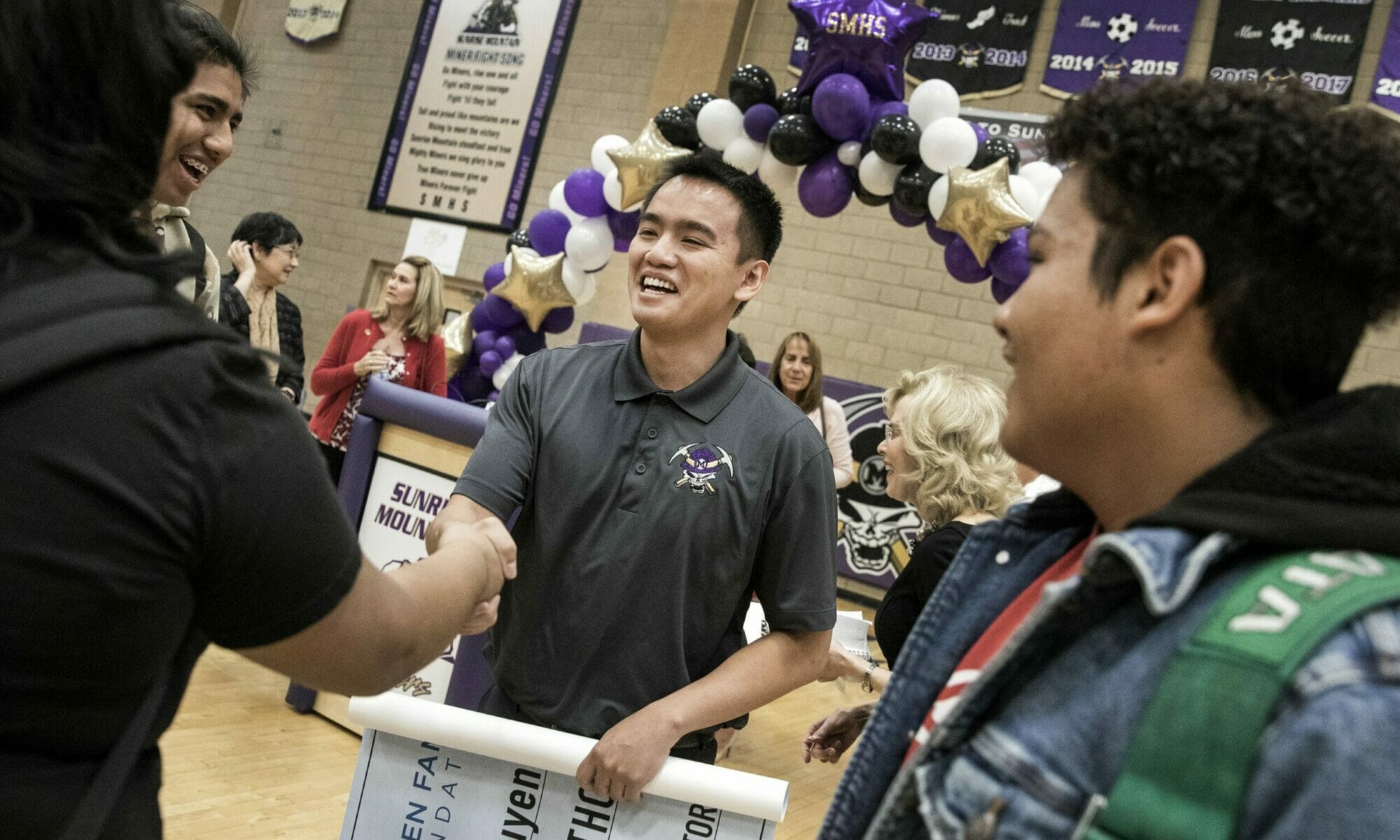 During Ben Nguyen’s second year teaching, he met a student with a 2.5 grade-point average who liked technology but struggled in math and didn’t see a viable post-graduation career pathway.

Nguyen said the young man told him he simply wanted to find “some job” and figure out how to make money. That student, however, later graduated with a 3.1 GPA and is in his third year studying mechanical engineering at UNLV. The success story reminds Nguyen — a Dartmouth College graduate and Teach for America alum — why he chose to be an educator.

“What can I say?” he said, his eyes welling with tears. “You don’t have to make the excuse to change the whole system to change lives. If you really have a great class or a great after-school experiences, if you lead your students the right way, if you believe in them, if you stay in contact with them, if you’re consistent with them, years to come, they’ll prove you not just wrong, but they’ll really impress you.”

But the tables were turned Thursday. It was time for Nguyen’s students to be impressed by him.

The 27-year-old teacher won a prestigious Milken Educator Award — along with a $25,000 check — during a surprise ceremony at Sunrise Mountain High School. Gov. Steve Sisolak and state Superintendent Jhone Ebert attended the event.

For more than three decades, the Milken Family Foundation has been honoring high-achieving teachers nationwide with no-strings-attached financial awards. The foundation hopes the recognition encourages educators to stay in the profession and inspires students to pursue teaching careers. Chairman and co-founder Lowell Milken emphasized the latter point during the assembly recognizing Nguyen. Speaking before the school’s roughly 2,500 students, he gave the oft-overlooked profession a plug.

“Think about the impact you could make, just like Ben, on so many young people’s lives,” he said.

Nguyen is one of two Nevada educators who will receive the award this year. The other hasn’t been announced.

The underlying goal of the awards — whose recipients are chosen through a confidential selection process — is particularly poignant in the Clark County School District, where, as of Thursday, 751 licensed educator positions remained vacant. Officials said the district has hired 1,573 licensed educators so far this academic year as it attempts to combat an ongoing teacher shortage.

“We’re trying to attract talented young people to understand the rewards of teaching and for Ben, who is an Ivy League graduate, to make a commitment to the young people in communities such as these, I think, is a very important statement,” Milken said. “We know that pay in education is not remotely equivalent to the importance of the job.”

Nguyen, however, said he considers teaching a way to pay back the nation that accepted his family — refugees from Vietnam — years ago. He moved to the United States as a toddler and grew up in Santa Rosa, California.

An anthropology major, Nguyen originally thought he would enter medical school. Instead, he joined Teach for America — an organization that recruits college graduates and places them in some of the most challenging classrooms — and landed at Sunrise Mountain, once deemed the lowest-achieving high school in the state. The northeast valley school had a graduation rate of 36 percent in 2012. This year it posted a 93 percent graduation rate.

Nguyen, now in his sixth year of teaching at Sunrise Mountain, launched the school’s robotics program as well as its automation and manufacturing technology programs.

“Teaching is a work of the soul,” he said, “and I feel that’s really what drives me.”

Nguyen said he’s confident his parents, although initially skeptical of his decision to enter teaching, realize the importance of his work. And, if they had any lingering doubts, Milken likely dispelled those when he asked Nguyen to call his father. The foundation chairman then took the phone and announced the news from inside Nguyen’s classroom.

As for how Nguyen plans to spend his unexpected five-figure windfall, that’s to be determined. But there’s a good chance some of those dollars will make their way back to Sunrise Mountain.

“A lot of what I do every year with the robotics program and after-school programs, I pay for stuff,” he said. “We go out to eat. I buy food for students. Sometimes I donate a little here or there to students’ causes. Sometimes AP tests here or there. I imagine it will be the same.”