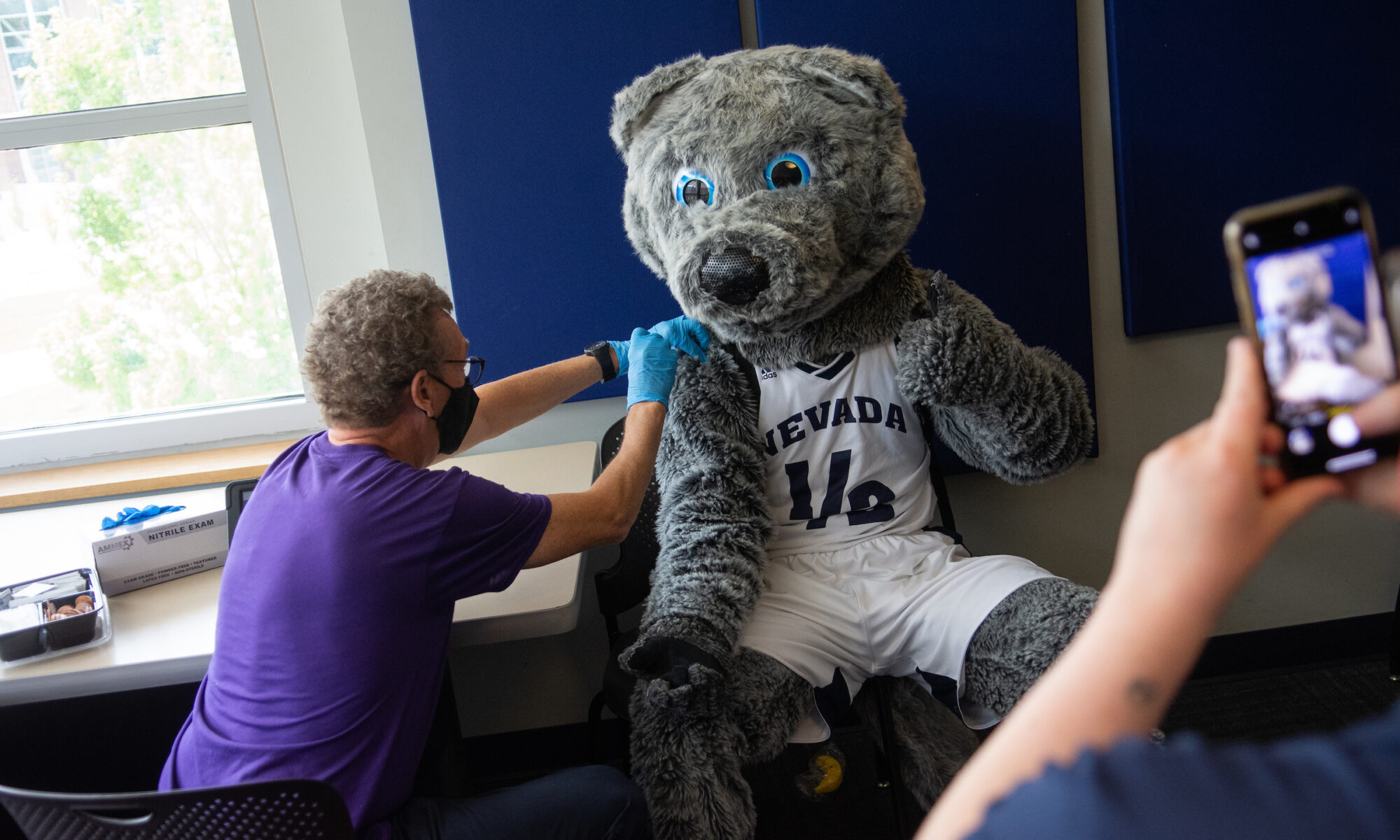 This story is part of "The Holdouts," an ongoing series about Nevadans who have been hesitant about getting vaccinated against the coronavirus.

For more than a year and a half, tens of thousands of students, faculty and staff across the Nevada System of Higher Education have waited eagerly for an end to the often-onerous online “Zoom school” of the pandemic.

That return is finally less than a week away. But amid a surge in cases spurred by the Delta variant, many of the hopes for normalcy have widened to include the implementation of familiar COVID mitigation measures: masks, distance and the vaccine.

With masks now required in most places and social distancing restrictions unlikely to return following the economic pain of 2020, many public health experts have pointed to the COVID vaccine as likely the most effective tool in limiting the spread of the virus on college campuses.

But as debates have raged over which board has the legal authority to mandate vaccines for college students and when that process might actually take place, some institutions have sought to ramp up localized efforts to boost vaccination rates.

At UNR, that effort has emerged this fall as “Vax the Pack,” a raft of COVID vaccine events and vaccination incentives (ranging from $5,000 in tuition scholarships to parking passes, all doled out through a prize drawing) meant to boost rates in the absence of any formal mandate from the state-level.

During one such vaccine event on Friday, Aug. 13, The Nevada Independent spoke to students on UNR’s campus about why they waited to get their shot.

A 22-year-old marketing major, Trey Mckoy said he didn’t want to rush into getting a vaccine that he felt was developed much more quickly than the years-long processes typically used to develop other vaccines.

The first coronavirus vaccines from Pfizer and Moderna were developed and received initial emergency approval in just 11 months — a historically short timeline, but one that occurred in extraordinary circumstances and that still involved tens of thousands of individuals participating in clinical trials that ultimately deemed those vaccines to be safe and effective.

“The main reason why I didn't go get it sooner is just from hearing people who didn't have something good to say about it,” Mckoy said. “So I kind of wanted to hear them out. And if I didn't have people in my ear saying, ‘Oh, it's a bad idea,’ then I definitely would have got it sooner.”

Still, after several months and after many of his friends had received shots of their own — coupled with reports that the vast majority of severe COVID cases, hospitalizations and deaths were among the unvaccinated — Mckoy said he decided it was “probably just a good idea to go and get your vaccination.”

“Combined with just, like, different things I've seen on social media, there's no real good reason not to get your vaccine at this point,” he said. “Everybody who's gotten it that I know has been fine. So I figured I might as well.”

Also concerned that vaccine makers “came out with it too early,” 20-year-old nursing student Amber Scheid said she finally got the vaccine because of a push from her mother — even if she was still “iffy” on the possible benefits.

“She went and got it, and she was really strong about it,” Scheid said. “She's always been strong about vaccines, and I just thought, I mean, I should do it for her, too. If she wanted me to do it, I do it.”

Scheid said there was little else that could have pushed her to get the vaccine sooner.

“I think it was, definitely — I just needed to see how it played out,” she said. “I definitely didn't want to, right when it came out, be the first one to get it. I wanted to wait a little bit.”

A freshman who had just moved to campus the day before, 17-year-old Orlando Osuna arrived at Friday’s Vax the Pack event in large part because he saw a post on Instagram.

“I thought maybe it was a chance to get it because the rest of my family is vaccinated,” Osuna said. “And since I had to move, I'll be on my own, my mom told me to be safe, not to get sick, and my older sister said that it'd be wise to, you know, utilize the things they have at UNR so I can get the vaccine so I can stay safe.”

Why did he wait? Because he had been skeptical that the vaccine was effective and, like so many others, was concerned that it was developed so quickly. Coupled with reports of an extremely rare but potentially deadly blood clotting disorder associated with the one-shot Johnson & Johnson vaccine, Osuna “wasn’t too sure if I should get it.”

“But my mom and sisters had gotten it,” he said. “My mom felt some symptoms from the Pfizer one, but my other sister, she was okay. So I was like, ‘Maybe it won't be so bad on me. Maybe I’ll give it a try.”

Waiting after receiving her first shot alongside her mother, Jennifer, 18-year-old freshman Ashley Guinasso said she waited because — even though she was confident about the efficacy of the vaccine — “I wanted to do a little bit more research on it.”

Concerned about the possible effects of the vaccine on fertility in women, Guinasso said the medical studies she found — many of them conducted on or by women — “all seemed to be positive.”

The final push, however, came with the arrival of the Delta variant and the surge in infections that followed.

“With the Delta variant going around, I just want to be extra safe,” she said. “Because you can never know if you're going to get it or not, and so just the vaccine is just an added bonus, that I will be okay and I won't need to go to the hospital, if for some reason I got COVID.”

Her mother, Jennifer, said the pair “always knew we were going to get [vaccinated],” and that their wait was more of a question of “when, where [and] how.” She added, however, that both had already recovered from COVID infections, and amid the Delta surge, they didn’t want to risk getting it again.

“I was down for more than a month each time,” Jennifer said, referencing two bouts with COVID. “And it wasn't serious, but it was hard to function. I couldn't get out of bed most days because I just couldn't breathe very well. My lungs hurt, I was tired. And I, as well as her, had done a lot of research and I particularly wanted the Janssen [vaccine]. But it's extremely hard to find in this area, so when they said they had it here, it was like ‘Okay, let's do it, let's get it done.”

(Disclosure: Jennifer Guinasso is a cousin of Jason Guinasso, an occasional contributor to The Nevada Independent opinion page).

A 19-year-old sophomore studying biomedical engineering, Jack Oxtal is heading back to campus this fall as a resident assistant (RA) in UNR’s residence halls — making him one of a small number of students who, as university employees, must either prove vaccination status or take weekly COVID tests.

“I just figured it was time,” Oxtal said. “I heard about the upcoming precautions if you weren't vaccinated, especially as an RA — the weekly tests and so on. And I just wanted to build a more comfortable community, at least within my building, and give them confidence that I am vaccinated.”

Oxtal said he likely would have gotten the vaccine even sooner, had it not been for what he described as an “anti-vax” environment at home. Now, out on his own and working with other students, “I figured now, especially, [it] was very important.”

“I still get like, bi-weekly messages from my parents about why not to get it,” he said. “And my mom has already gotten it; it's my stepdad who's very against it. But I decided I'm just gonna do it anyway.”

Still, Oxtal said the decision to get vaccinated didn’t come without at least some hesitation. Also pointing to rare issues identified earlier this year with the Johnson & Johnson vaccine and the speed of vaccine development, he said he was “a little nervous.”

“But I then had the realization — I've gotten so many vaccines,” he said. “And yeah, it came out pretty quick. But it has to be quick, it has to be proactive. So I just figured, I trust it, and I'm gonna give it a shot. Literally.”