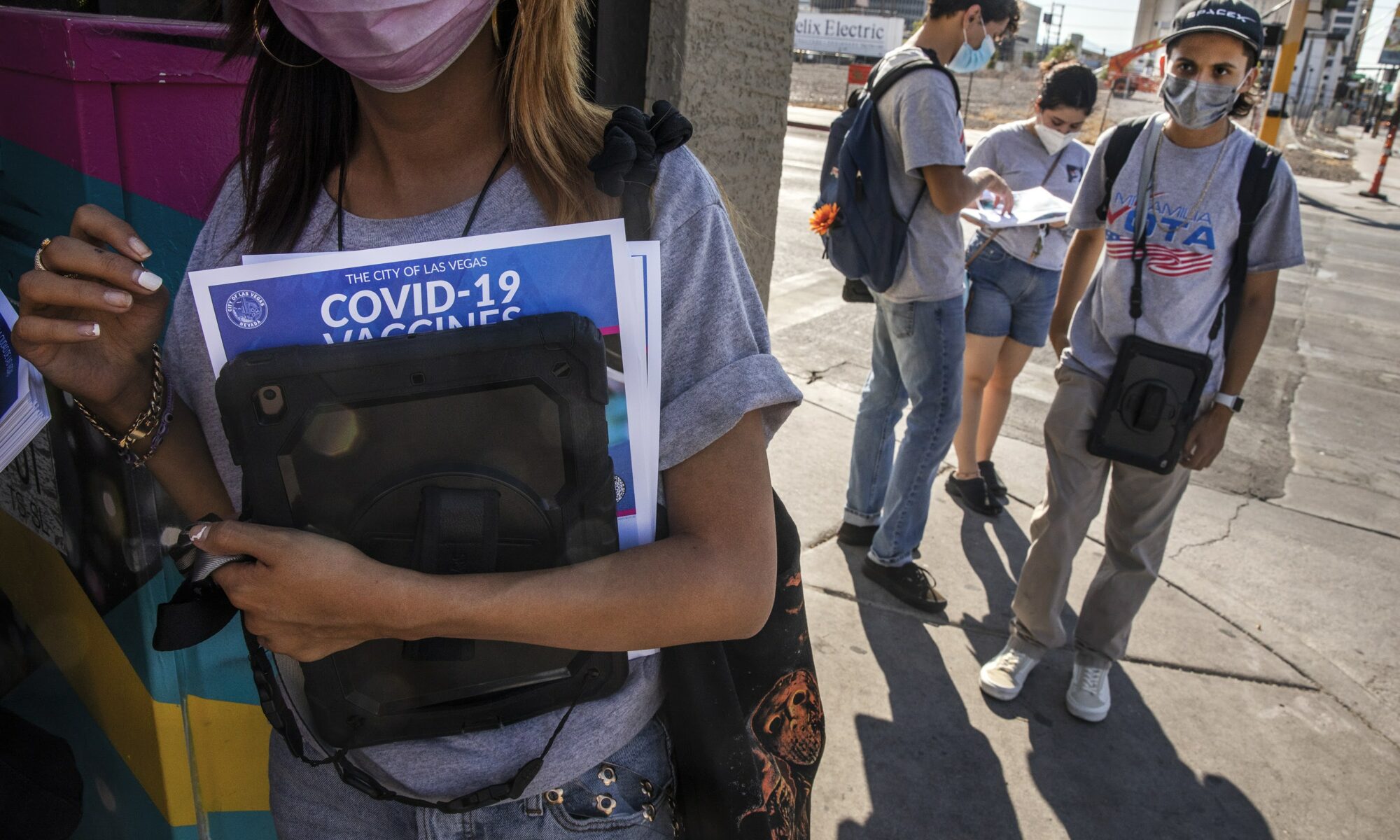 Welcome to the 54th installment of “Coronavirus Contextualized.”

Since the beginning of the pandemic, we have brought you the latest COVID-19 numbers in Nevada, including COVID-19 cases, hospitalizations and deaths, and provided context to them on a near-weekly basis through this series. (Prior editions of “Coronavirus Contextualized” live here.)

Below, we take a look at how COVID-19 is hitting Nevada unevenly, with cases and hospitalizations starting to plateau in hard-hit Clark County while continuing to climb in Washoe County and several other counties across the state. Breakthrough cases among fully vaccinated individuals continue to represent just a sliver of overall case and hospitalization numbers.

The number of new COVID-19 cases reported on average each day statewide has been fluctuating in recent days, the result of a small downward trend in Clark County coupled with upward trends in Washoe County and other counties.

As of Thursday, 1,082 new cases were reported on average each day over the previous seven days, slightly down from the recent high point, 1,093, on Monday. The daily average has been fluctuating since Aug. 3.

The trends do, however, vary by county. The daily case average in Clark County — which was hit hard and early by the latest wave of the virus — has been generally falling, with some slight fluctuations, since Aug. 1, when it saw an average of 917 cases reported on average over the previous seven days. As of Thursday, the county’s case average was 807. Both of those numbers are significantly less than the peak of 1,073 the county saw last summer.

In Washoe County, meanwhile, cases continue to rise day over day, hitting a seven-day average of 164 on Thursday. That number is already higher than the peak of the very small summer surge Washoe County saw in 2020, where cases peaked at a daily average of 98 on July 30. During the fall and winter surge, the daily case average peaked at 532.

“We are climbing quite rapidly and alarmingly with the number of cases we have, and the vast majority of those cases are unvaccinated individuals,” Washoe County District Health Officer Kevin Dick said on a press call this week.

In Clark County, the Delta variant was responsible for 85 percent of sequenced cases in July, compared to 89 percent in Washoe County, 91 percent in Carson City and 38 percent in Elko County.

In total, there were 1,411 cases of the Delta variant sequenced in July, including 931 in Clark County, 372 in Washoe County, 46 in Lyon County, 29 in Carson City, 21 in Elko County, eight in Churchill County and four in Pershing County. Not all positive COVID-19 samples are sequenced, however, meaning those totals represent just a fraction of all Delta variant cases.

At the same time, the test positivity rate, which looks at the percentage of tests coming back positive out of the total tested, has started to fluctuate in recent days.

It is not possible to independently calculate the test positivity rate based on test encounters because the state only publicly reports the number of positive cases, not the number of positive test encounters. However, the state does provide this number, calculated as an average over a 14-day period with a seven-day lag. As of Wednesday, that number was 16.3 percent. It has been fluctuating between 16.3 and 16.4 percent since Saturday.

Since the beginning of the pandemic, more than 1.8 million people — 59 percent of Nevadans — have been tested for COVID-19, and there have been more than 3.8 million individual testing encounters.

The pace of vaccine distribution in Nevada has been generally increasing in recent weeks as the state ramps up efforts to get shots in arms.

As of Thursday, about 7,000 vaccines were reported administered each day over the last seven days, down from 7,800 last week but up from 6,700 two weeks before and up from a low of 5,200 last month.

Nationally, Nevada ranks 33rd among the 50 states for percentage of its population fully vaccinated, at 45.5 percent, continuing to trail all of its neighbors except Idaho, which comes in at 46th with 37.9 percent vaccinated.

Of the breakthrough hospitalizations, 68 percent had underlying conditions, 73 percent were 65 years or older and 59 percent were men.

“The vaccines are doing exactly what they are designed to do: protect against severe illness and death,” said Candice McDaniel, deputy director of programs for the Department of Health and Human Services, on Thursday press call.

As of Thursday, 20 COVID-19 deaths were being reported on average each day over the prior seven days, up from 11 last week and five at the same point last month.

Over the last seven days, 141 new COVID-19 deaths have been reported across the state — up from 79 last week — including:

Since the beginning of the pandemic, there have been 6,120 deaths from COVID-19. Nevada crested 6,000 deaths last week, which Gov. Steve Sisolak, in a statement, called a “significant and heartbreaking milestone.”

“My heart aches alongside all of the Nevada families who are mourning the loss of a loved one,” Sisolak said. “I want to encourage all Nevadans who have not yet done so to please consider getting the COVID-19 vaccine as soon as possible. The vaccines are free, safe and incredibly effective at preventing severe illness, hospitalization and death.”

Last week, COVID-19 hospitalizations in Nevada surpassed last summer’s record. Hospitalization numbers across the state are starting to stabilize, the result of new hospitalizations slowing in Clark County while increasing in Northern Nevada.

As of Wednesday, there were 1,276 people hospitalized with confirmed or suspected cases of COVID-19 across the state, down from 1,317 the day before, the recent record. Hospitalizations exceeded last summer’s record, 1,165, on Aug. 1 and have remained above that level since then. Hospitalization numbers remain below the record 2,025 hospitalizations seen during the fall and winter surge.

County-level data, again, reveals differing trends across the state. In Clark County, hospitalization numbers have been relatively level since the end of July, where they have continued to rapidly climb in Washoe County.

The Nevada Hospital Association, in its weekly report, highlighted this dichotomy.

“Northern Nevada is experiencing its second well defined surge of COVID-19 hospitalizations,” the hospital association reported. “Unlike southern Nevada, there is currently no evidence to suggest that this wave is slowing.”

However, the hospital association noted that even as case counts slow in Southern Nevada, hospitalizations during previous surges have typically remained high “for close to a month once the end of the peak has been reached.”

Still, the hospital association has “warnings” in place for staffing levels, high occupancy rates and ICU occupancy rates in Southern Nevada. No regions are in “alert” or “crisis mode,” the two levels after “warning.”

Nine of the state’s 17 counties are considered by the state as being at elevated risk for the spread of COVID-19 as of Thursday: Clark, Lincoln, Nye, Carson City, Douglas, Lyon, Washoe, Churchill and Elko.

The state, however, continues to align its mask mandate with federal guidance, meaning it is using the CDC’s community transmission tracker to determine which counties are at substantial or high risk for the spread of COVID-19 and therefore required to abide by indoor mask mandates for vaccinated and unvaccinated individuals alike.

As of Tuesday, when the state reevaluates CDC data for purposes of making changes to its masking guidance, all Nevada counties except Esmeralda, Eureka, Lander and Storey counties were considered at “high” risk of transmission.

Two other counties, Humboldt and Pershing, moved from "moderate" to "high" transmission this week, meaning that although they have no mask mandate in place now, they could have one next week if they remain at a "high" or "substantial transmission level."

Esmeralda’s mask mandate, meanwhile, drops on Friday for vaccinated individuals, the result of two weeks of sustained “low” transmission in the county.

The other three counties — Eureka, Lander and Storey — do not currently have mask mandates in place.