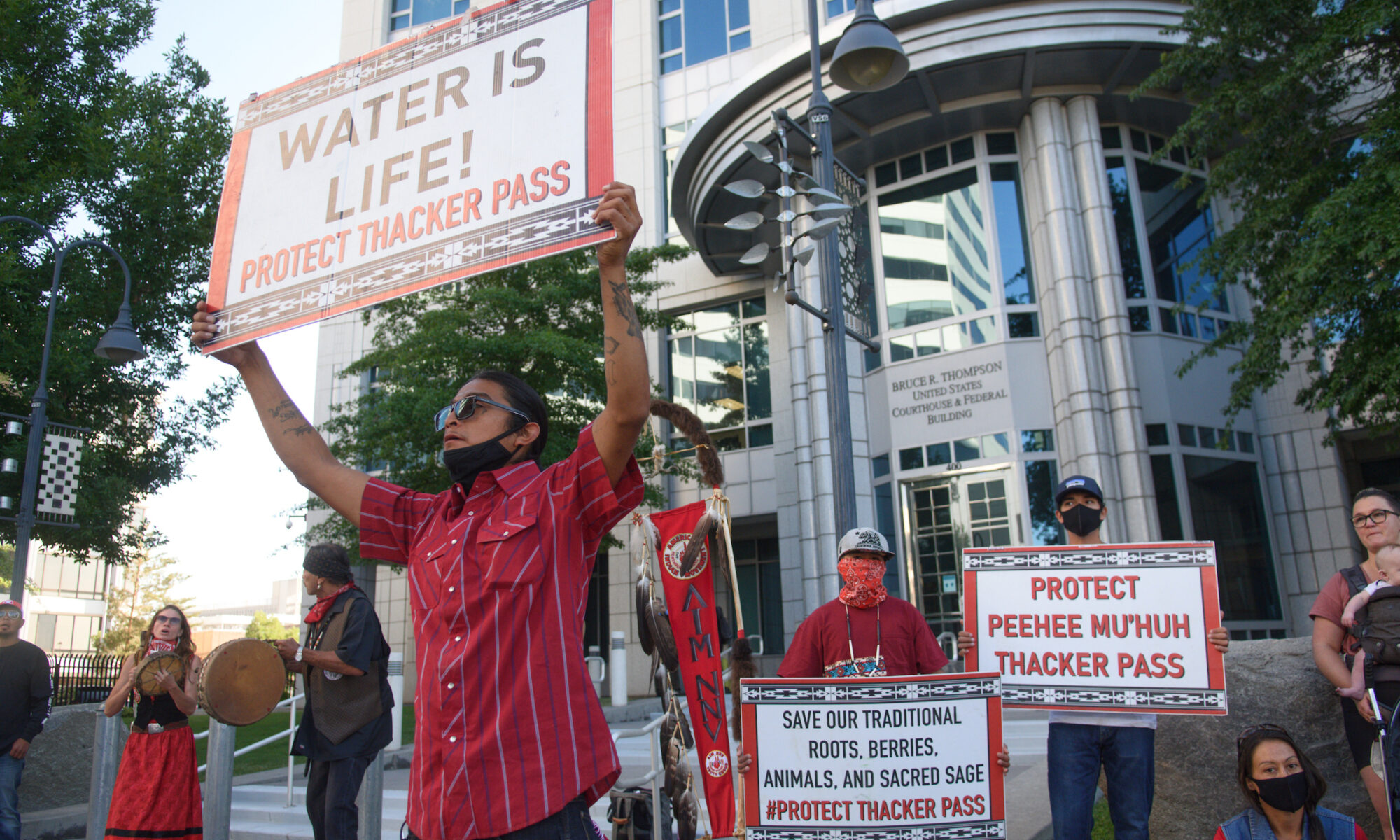 In front of a federal courthouse in downtown Reno on Wednesday morning, more than 50 people from Indigenous groups across the state gathered in a peaceful protest against the proposed Thacker Pass lithium mine north of Winnemucca. Protesters waved signs at cars driving by.

Their message to those inside the eighth-floor courtroom was clear: “Protect Thacker Pass.” “Consultation is NOT Consent.” “Fort McDermitt Tribal Descendants Against Lithium Nevada.”

U.S. District Court Judge Miranda Du’s courtroom was filled on Wednesday with Indigenous activists, environmentalists and employees for Lithium Nevada, the company developing the mine. Company shareholders joined through a phone line.

It was an important hearing for a lithium project at the center of an energy transition away from fossil fuels and toward electrification. Since federal land managers approved the mine in the final days of the Trump administration, it has drawn scrutiny from Native American tribes in the Great Basin, environmental groups and the rural communities that would surround the mine.

The hearing stemmed from a lawsuit, filed by four environmental groups in February. In their suit, the groups challenged the government’s approval of the mine, arguing that the U.S. Bureau of Land Management fast-tracked a key environmental review and did not fully weigh the mine’s impacts. Now they are asking the court to halt mine-related activities until the issue is settled.

At issue on Wednesday was whether the court should grant an injunction — an order that would stop impending archeological digging at the mine site — as litigation proceeds.

As early as next Thursday, July 29, federal land managers had been expected to give Lithium Nevada permission to begin trenching and digging as part of a Historic Properties Treatment Plan to collect and catalogue artifacts. In court filings, the company argued that the work is a prerequisite to installing the water and power lines needed to begin construction in early 2022.

Last week, tribal descendents of the Fort McDermitt Paiute and Shoshone Tribe, which is near the mine, held a protest at the Carson City headquarters of Lithium Nevada’s archeological contractor. The group of tribal members, Atsa koodakuh wyh Nuwu, or the People of Red Mountain, left a letter on the contractor’s door and asked to meet with the company.

Talasi Brooks, an attorney representing the environmental groups, said that excavation activities would cause an “irreparable harm” to the winter habitat for Greater sage-grouse, a sensitive bird species that relies on sagebrush, quiet places, and faces multiple threats in the Great Basin.

“There will likely be more sage-grouse mortality because of this habitat destruction,” argued Brooks, a staff attorney for the Western Watersheds Project, one of the plaintiffs in the case.

The public interest, she argued, leaned toward granting an injunction that Brooks said would only cause the mining company a “temporary delay,” even if the court ultimately upholds the environmental review.

But attorneys for the U.S. Bureau of Land Management, an agency within the Department of the Interior, and Lithium Nevada argued that the threats that sage-grouse faced from the excavation were overstated. The company said in a declaration that excavation would disturb only a small area, about 0.36 acres, compared to existing ground disturbance on about 56 acres of land.

Laura Granier, an attorney representing Lithium Nevada, said “the delay creates uncertainty.” Granier said such an injunction would cause substantial harm to a company and project that, she argued, is critical for the local economy and the country’s efforts to tackle climate change.

The judge, who peppered the attorneys with questions about substantive and procedural claims, plans to rule on the injunction by July 29. But that date is now important for another reason: A new motion could bring additional arguments into the courtroom.

The day before the hearing, the Reno-Sparks Indian Colony and tribal members from the Fort McDermitt Paiute and Shoshone Tribe filed a motion to intervene as a plaintiff on the side of the environmental groups. They argue that federal land managers, in approving the mine, violated provisions of the National Historic Preservation Act that require input from tribes and the public.

The Reno-Sparks Indian Colony, the motion notes, “attaches cultural and religious significance to historic properties that will be affected by the Thacker Pass Lithium Mine Project.” The claims in the motion also represent the People of Red Mountain, who consider Thacker Pass sacred, the site of a massacre and a hiding spot when soldiers forced their ancestors onto reservations.

In a brief filed yesterday, lawyers for the groups seeking to intervene in the case said the People of Red Mountain “preserve and pass on oral histories about Thacker Pass (“Peehee mu’huh”), regularly perform ceremonies in Peehee mu’huh, hunt and gather in Peehee mu’huh, plan on performing ceremony, hunting, and gathering in Peehee mu’huh in the future, and are concerned with the Project’s effects on historic properties  located within its footprint.

The Fort McDermitt Paiute and Shoshone Tribe’s council has not filed a motion to intervene.

Du did not hear arguments about the motion on Wednesday. But she approved an expedited process for moving forward. Du plans to decide on the motion to intervene by July 29. If the motion is granted, the Indigenous groups will also be permitted to seek an injunction.

The judge requested that the U.S. Bureau of Land Management wait until the motions are resolved before allowing the excavation work to begin. A lawyer for the agency, Arwyn Carroll, had, earlier in the hearing, indicated that work would not begin by July 29, as previously suggested in a court document. The agency is still working on permitting the excavation work, and Carroll said consultation with the Fort McDermitt Paiute and Shoshone Tribe is ongoing.

“It certainly won’t happen before next Thursday,” Carroll said.

The agency, however, did not commit to a timeline during the hearing. If an injunction is not issued, protesters have said they are prepared to take direct action. Protect Thacker Pass, a protest group camped at the site, had planned to conduct direct action training this weekend.

As for the underlying issues in the case, the judge heard a preview of arguments that are likely to come. Arguments in the case could revolve around the 1872 Mining Law, which opened up federal land to mining. Roger Flynn, a lawyer for the environmental groups and a director of the Western Mining Action Project, clashed with Granier over their interpretation of the law.

Both lawyers cited recent cases, including the Rosemont copper mine case in Arizona, that deal directly with the 1872 law. Those cases are working their way through the federal court system.

Acting state engineer appointed to the position: Adam Sullivan, the acting state engineer, will serve in the position, the Department of Conservation and Natural Resources announced this week. Sullivan has worked on Nevada water issues for more than two decades and with the state agency since 2009. The Associated Press has more.

Those who watch the Colorado River spend a lot of time watching Lake Mead. But Lake Powell, the reservoir just upstream, is also an important indicator. Within the next few days, Lake Powell could reach its lowest level since it was filled, KUNC’s Luke Runyon reported.

I missed this last week, but the State Land Use Advisory Council approved a letter supporting a smart-from-the-start approach to renewable development. The letter comes as more and more conflicts arise between siting renewable energy (solar, etc…) and other uses of the land.

On a not unrelated note, Clark County has a draft of its first Master Plan update since the 1980s. Yes, you read that right. The 1980s. These are the technical administrative processes that might not get the big headlines, but these plans often dictate planning for many decades.

Caltech is paying damages after a scientist drilled at a petroglyph site on federal land near Bishop, California. Louis Sahagún from the Los Angeles Times has more on the story.

“The Utah Rivers Council and ten other Colorado River Basin organizations have requested a federal investigation into the use of federal funds by the Central Utah Water Conservancy District, or CUWCD,” the Salt Lake Tribune’s Owen Tucker-Smith reported.

Our reporter Sean Golonka did an excellent piece contextualizing a UNLV study that found an increase in Henderson residential water usage during the pandemic.

The mining oversight board that hasn’t met in half a decade. I wrote about what happened to the Mining Oversight and Accountability Commission and delays in reconstituting the board.

Ioneer, a lithium project near Tonopah, received a state water permit this week.